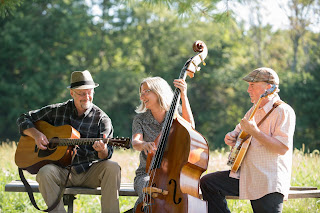 After years of playing on Pat and Rosemary's porch, at festival jams, and the occasional gig, Jillian tried to convince Pat to cave in and put a band together. That didn't work until Dave came along and twisted his arm (it's healed up now, and seems to have improved his banjo playing!). CCE spends their band time together picking at Pat's house, mostly because his wife Rosemary is an awesome hostess and pretty much a goddess in the kitchen.

CCE has recorded two CD projects.  Welcome To Coal County was released in 2011, and Old Coal Town in 2017.

Pat comes from Summit Hill, PA, and began playing musical instruments when he was just a boy. As one of 8 children in a musical family, he took up the banjo first and later also learned to play guitar, harmonica, mandolin, and bass. Pat has played in many configurations, but mainly as a solo performer. Pat and Rosemary have a multi-instrumentalist son, Shane, who plays bass in the bluegrass band Serene Green.

Located in Reading, PA, Dave also began playing guitar as a youngster. He has worked in country, rock, and bluegrass bands, and also played as a solo performer for many years. Over time, Dave has added dobro and upright bass to his repertoire, and fools with the banjo and mandolin when nobody is listening.

Jillian also lives in Reading, PA, and started her musical career singing Bonnie Raitt tunes with her sisters into a hairbrush. Jillian has been playing bass since 1996, and has two children; Chelsea (guitar) and Mason (drums, bass, mandolin).
Home